So...I've finished my 52nd book tonight. So I thought I'd do another update. Obviously the year isn't over yet...so I'll carry on reading and recording. Last year I read 57 books...so it will be nice to see if I can beat that. I should add that Ive not included any of the non-fiction reference books I read as well. I'm a recipe and gardening book addict.

New Additions to the Flock

We've had the ex-bats now for a week and they've settled down very nicely. The run and two hen houses are looking very poorly populated though and today was the day to go and pick out the rest of our hens. 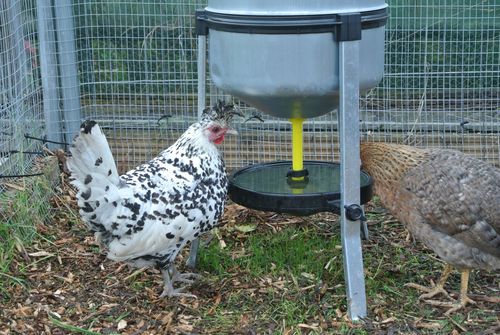 The plan has always been to get a mixture. I really wanted to give some ex-bats a retirement home, they are reliable layers for the next short while, but their best laying period is coming to or is at an end...so I thought it would be good to get some hybrids at point of lay. My theory is for them to get into their peak laying as the ex-bats start to slow down and then I thought about having some chickens for fun...more pets than as egg providers.

I'm quite keen to get chickens which will give different coloured eggs too, as this is always a nice combination.

In November, a lot of places don't have the selection of chickens that they have during the spring and summer months...it's really the low season, so it was very difficult to find a good farm/breeder who would have a broad selection. I didn't mind travelling to a few places, but I did want the introduction to include all the chickens, so it was one intro and minimal stress to the ex-bats. And although I do have a separate run which I could use for introductions, I was keen not to use it for this first flock integration.

In the end, I was able to locate one place where they had a broad selection and of course I ended up with more chickens than I had planned. I am really pleased though, as I managed to get a good selection of hybrids and pure breeds, and of large and bantam fowl. Among them cream legbar, marans, pekin bantam, booted bantam, appenzeller spitzhauben, laced-winged wyandotte.

So far there have been a few scuffles as everyone gets acquainted, but nothing too major...I'm told it'll take a few days for everyone to settle down and a few weeks for them to all be nicely bonded and knowing their place in the pecking order.

Today, I thought I'd treat the chickens to their first chard meal...they weren't very sure at all to start with. But of course they slowly started to get that the weird green stuff might actually be tasty. It's very rewarding watching them start to get to grips with normal chicken behaviour. The past couple of nights, two of the chickens haven't worked out that there's two snug warm hen houses to sleep in. I've found them fast asleep outside, just at the entrance to one of the houses. So they needed popping into their house to keep warm and safe.

I've also decided to keep a track of eggs and a mini record of the hens. It's a good way to track, injury, who's laying (if you can tell), what's happening at what time of the year...etc etc. This morning there was one egg. Yesterday there were two...so they seem to be fine and settling in nicely. Posted at 22:55 in Allotment, Chickens, Everyday Journal, Photo of the Day | Permalink | Comments (0)

So this is a picture of our first egg and Little Blue. Poor Little Blue wasn't feeling too bright in this picture. She unfortunately got stuck in one of the doors on her journey from the battery farm to the rescue centre. The other hens thought it was a great game to peck her bum. As we arrived at the rescue centre, one of the volunteers was carrying her to give her a little sunshine and asked if we wanted to take her...I promptly said yes. I just figured if we were going to rescue unfortunate chickens, we may as well rehome one of the most unfortunate. I wasn't sure how many other people would want her, as she looked pretty awful.

Anyhow, as chickens are attracted to the colour red, any bleeding wound can attract attention and result in quite serious injury. The rescue workers sprayed her bum with gentian violet antiseptic spray...so her bum is blue. And she subsequently got called Little Blue.

I should also mention, she did not lay the egg in the picture. As soon as the chickens were released into their new home, one of them quickly discovered the nest boxes and kindly left a homecoming gift. 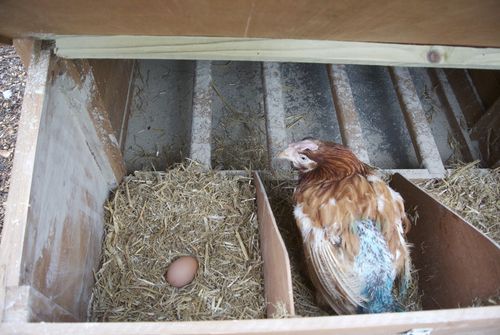 Posted at 10:32 in Allotment, Chickens, Everyday Journal, Photo of the Day | Permalink | Comments (0)

This has been today's excitement...the additional of four to my menagerie. 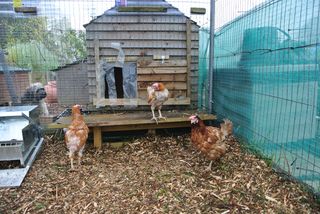 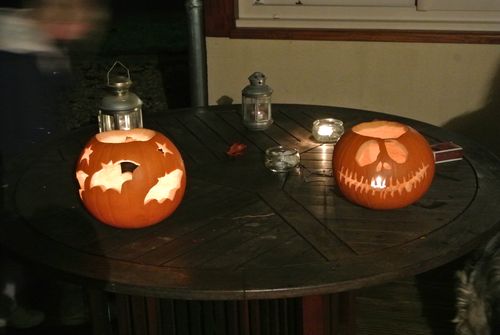 What a stunning morning it was going for a lovely early puppy walk...I do truly love autumn mornings. 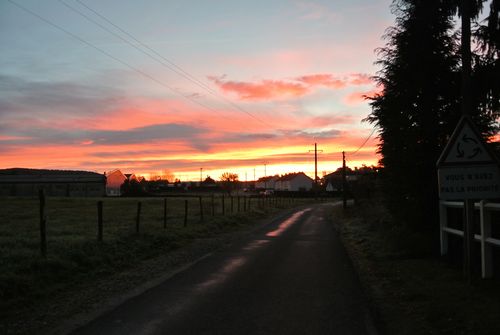 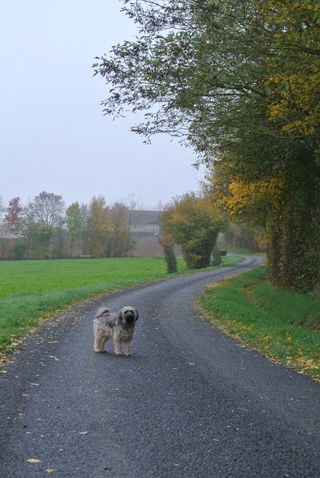 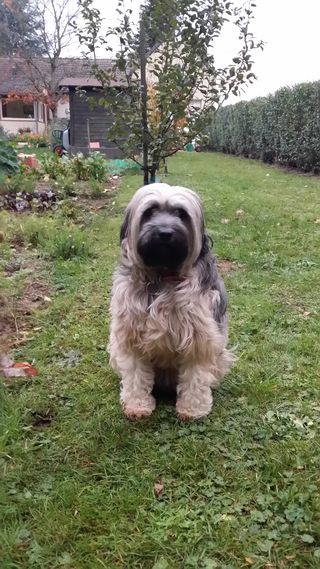 I have bug hotel envy!! 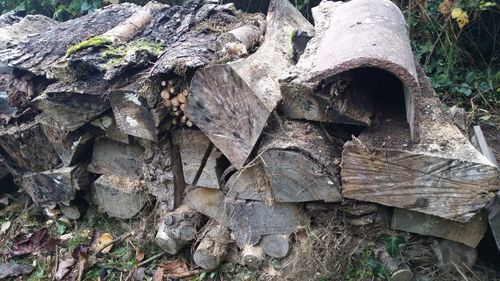 Earlier in the year, I bought a lovely little blue bug hotel for the allotment. It's about 30 cm big. So this bug hotel is a little more impressive. I might have to recreate something similar on the plot this winter, if I ever have any time, in amongst moving from plot 18 and getting 51 straight...but a girl can dream.

Posted at 22:54 in Allotment, Everyday Journal, Photo of the Day | Permalink | Comments (0)

The Unfortunate Downsides of Autumnal Walks

Autumn is my absolute favourite season. I love the colours, the chill in the air on a sunny day. My birthday is in the autumn...but I adore Halloween and Bonfire Night and the colourful run up to Christmas. I love the autumnal fashion and I think the colours and layering really suit me and I love getting back into my boots

There's nothing I like better than being outside, and kicking up the leaves, going foraging and generally lapping up as much vitamin D as possible.

The downside and it's really a downside for my poor pup...is ticks. I hate them. And despite her being well up to date with treatments, I've found a few over the past couple of weeks. I know the colder weather should mean that you see less ticks...I think because of the different habitats I'm frequenting at the moment, she's clearly picking up more. I think I will need to buy a tick remover, as I'm really not very good at getting them out. The other worry for me is that they could be deer ticks and therefore could spread Lyme's disease. She had one on her head last night and I found a tiny one under her armpit this morning. I will keep a close eye on her and I think I need to talk to the vet about what tick medication options there are, as her current treatment doesn't seem to be working very well.

I was given these roses about a week ago, as small buds. And they've bloomed into the most beautiful flowers. I'm actually really impressed at how well they've lasted. I have a stunning old climbing rose at the front of my house, but if you pick the flowers they last about five minutes. Maybe I need to find out what kind of roses these are and plant some bushes. 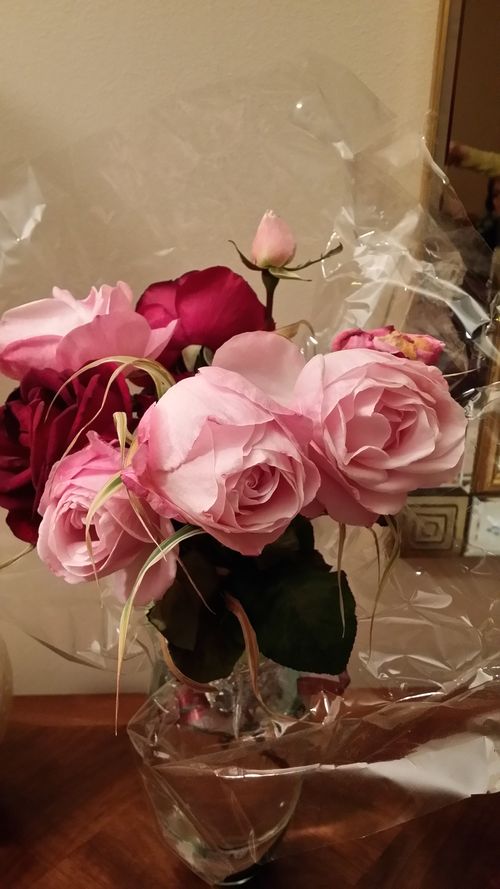 Today we went to a local goat farm. We went and saw all the goats before buying some lovely homemade products. 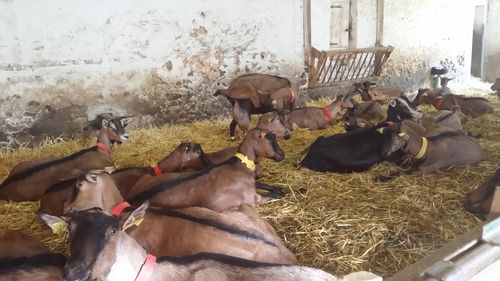 I love a good autumnal forage. At this time of the year, there's sloes to be found. I've found crab apples, elderberries and rose hips too in past. But my most exciting thing to forage for is, without a doubt, mushrooms. I think it's the challenge of mushroom hunting. I'm not very good at it and can't identify much, but the most common ones. But there is something gleeful about finding them. 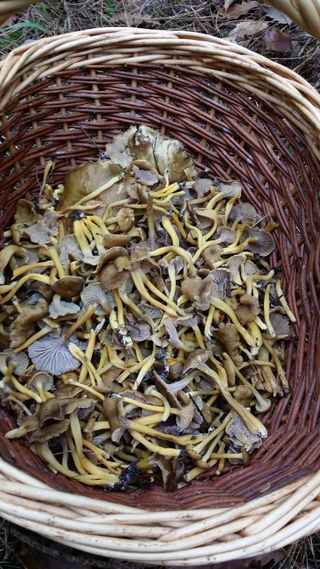 They are so expensive in the shops, so finding them is such a treat...especially when they are fried with garlic and a bit of butter. Mmmmm!!

It was mainly chanterelles that we found. But there are also three ceps somewhere in the depths of the basket.

I think we are going to try to dry some of them and see how that goes...it would be nice to have a stash to eat later this year when they are all gone.

This week I've spent quite a bit of time in the forest forging and managed to gather an enormous bag of chestnuts. I've been perusing The River Cottage Handbook on Preserves quite a lot lately (I've recently made spicy crab apple jelly from it and also beetroot relish) and spotted a recipe to make chestnut jam. Last year, I made creme de maron (vanilla and chocolate flavours)...but it doesn't keep well, so it was quite exciting to see a way to keep chestnut to enjoy off-season throughout the year. So my plan is to make a batch of the jam. 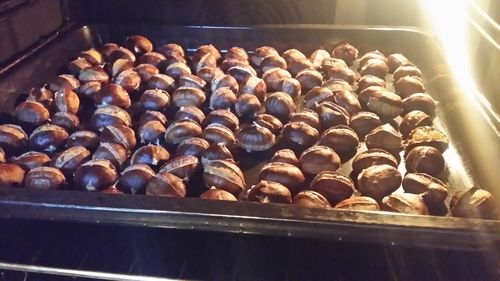 Now the last time I did anything with chestnuts, it was a real faff. Scoring, boiling and then roasting the chestnuts and then double peeling them when they are still hot...ouch, my fingers did hurt. It's worth it, but you do need to dedicate a decent amount of time to it. So this year, I thought I'd have a search online and see if there were any hints or tips for best ways of shelling them. I found a few articles which said you need to score half way around their middles (the round part of the chestnut)...and then roast them and they should open up like a clam.

I gave it a go this morning and about half did actually pop out like a clam...I think I have some fine-tuning to do, as I think I might need to boil them for a few minutes before they go in the oven as I think the ones that didn't pop open might be due to them being too dry. So a few test runs are needed, but I'm quite please with the initial results. I'm having to roast in batches anyway...so it does give me a  chance do some testing of the best method.

I'm hoping I get to make the jam today and then, I might make some creme de maron and try glacing some of them...

Marketing day and I couldn't believe the size of these chou...definitely not mon petit chou!!! I think the squash also look really good eating. 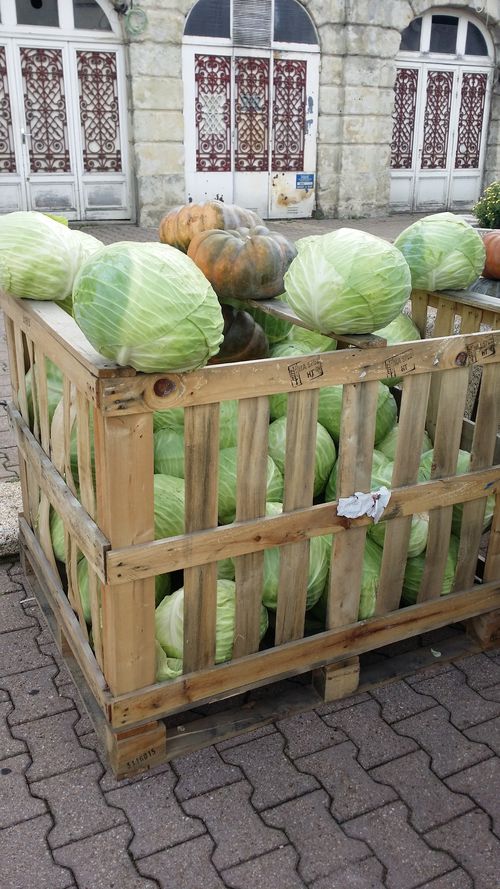 Look at this little fellow I found in the woods...it's a fire salamander. I guess the rainy weather brought it out. 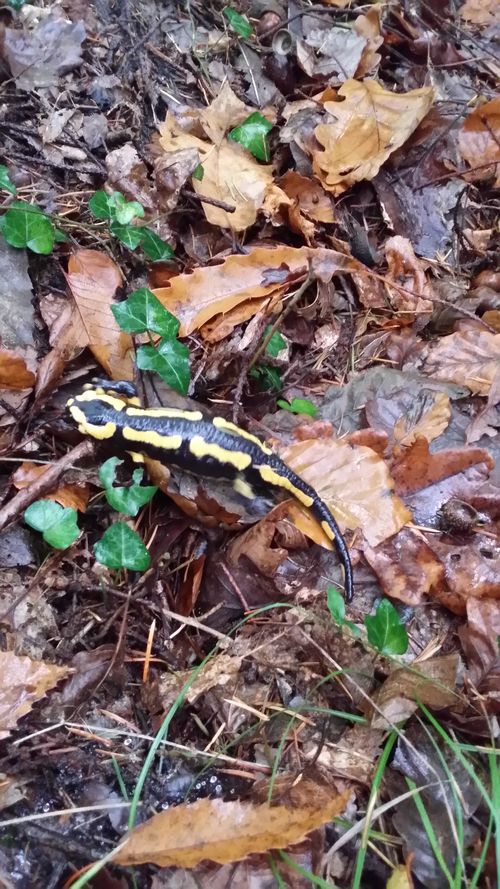 Another day, another picture of a toadstool... 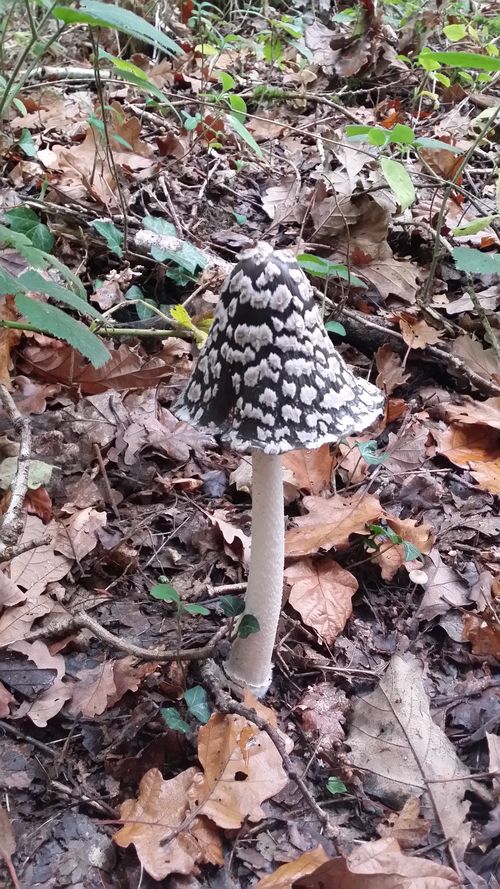 I thought I'd better do another quick update on my 52 Books challenge. Things are going really well, and I've just got 3 more to go to reach my target for the year. Hopefully I should manage this quite easily. Last year I managed 57 books in total...and a little part of me would like to beat this if possible too.

48. The Wolves of London - Mark Morris

A long long time ago, I read some of Freda Warrington's vampire books - A Taste of Blood Wine and a Dance in Blood Velvet. I absolutely loved Freda Warrington and I recently discovered a whole load of other books which she'd written. I actually got Dark Cathedral on audiobook, as it's not easy to get hold of as a paperback anymore. I couldn't stop listening...I truly loved it. I've got the next one in the series to read - Pagan Moon. So hopefully that'll be one of my next entries.

A wander in the woods and look what I found...how stunning!! 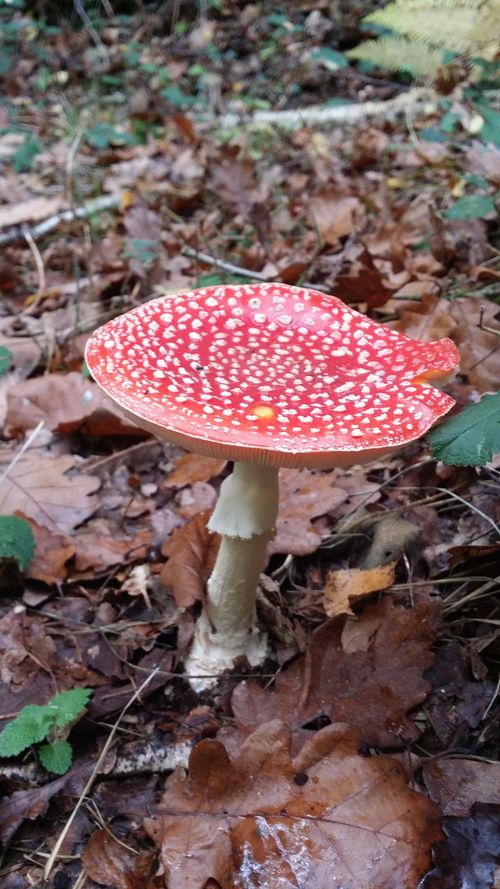 Other Allotments and Veg Patches